Thanks to James Denham for this photo and information which he has posted on Geograph. New things come to light all the time!
A Covenanters' guard house   NT867 532
The lower half of this old building is said to be a guard house for Covenanting soldiers and was probably built to protect a nearby Conventicle in 1670. At the Conventicle at Allanbank, formerly known as East Nisbet, The great convenanting minister, Reverend John Blackadder, offered communion to an audience of over 3,200 people all keen to preserve Scotland's chosen church amidst the onslaught of Royalist soldiers.
As you will notice, the lower half of the building contains gun loops while the top has been added much later to form a shed. 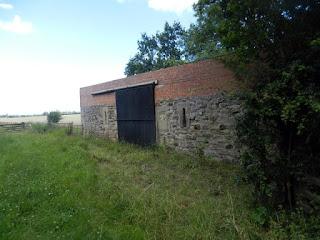 Thanks to my brother, Jonathan, and Paul's expertise, we now have a video with dad introducing the website and the meaning of the title 'What mean ye by these stones?' They have chosen Donald Cargil's memorial at Rattray as the location for the video. Apparently mum was standing there trying to shut out the sound of the wind and rain with an umbrella. I said the raindrops on the screen and the cows in the background give it an authentic look. Still, it was necessary to dub the video afterwards in the warmth of Johnny's house - hence the poor quality. All this technology is too much for dad - he hasn't even seen the website yet! I'm awaiting his approval before we make it too public!
Becky
Posted by The Covenanting Trail at 13:37 No comments:

Welcome to our Covenanting blog!

Dad and I are pleased to announce the launch of our new website, thecovenantingtrail.co.uk. This is the result of decades of work on my dad's part and nearing one decade on mine! Many miles have been undertaken by car and foot in search of these remote graves and many emails have been sent and phone calls made to request permission to use photographs and texts from a myriad of sources. Our thanks to everyone who has made this work possible. We look forward to its continuation in these pages.
Posted by The Covenanting Trail at 13:37 2 comments:

The Covenanting Trail
Dad has held a passion in his heart for the Scottish Covenanters for several decades. I think it maybe blossomed when we moved to Dumfries and Galloway around 1972 - an area rich in Covenanting history. These men and women of great faith have been an inspiration to his own stalwart faith in God. We have spent many hours together walking, talking, studying maps and literature in order to bring together this photographic index. It is a joy to be able to share something of his discoveries and his passion on this website.